The Return to Mobile Life…

Happy Mother’s Day to all the moms out there, especially the two I have been blessed with!! I hope your days are blessed with endless love and joy!!

So, Off-Rampville lasted 4 1/2 days, which is when my beautiful soul friend, Jen, and her hubby, Jim, drove all the way up from the Ocean Shores area to tow us off the off ramp with their truck. No, they don’t own a tow truck. They pulled us off, Marilyn and the travel trailer at the same time, with their pickup. We went from the off ramp to a parking lot in front of an apartment complex. Though I wasn’t too excited about being in that parking lot, options were extremely limited (this parking lot or ???) and pretty much anywhere was better than the off ramp.

Soon after Jen and Jim towed us to the apartment complex parking lot, the latest mechanic in our list showed up. He had it figured out so incredibly quickly that I ended up having some resentment toward the two previous mechanics. It was getting late, light was dwindling, so the mechanic hopped on the phone and ordered the part we needed for us to pick up in the morning. He would be back the next day to get us going.

After everyone had left and we were getting settled in to call it a day, a couple of police officers showed up. Apparently, a tenant had called in and asked the officers to make sure we weren’t some mobile meth lab or something. We showed the officers the inside of the trailer and the RV and they deemed both to not be part of some mobile drug lab. This was the only hassling we received, which didn’t even seem like hassling.

Next morning, we were up and going. We had a part to pick up in Federal Way that we could switch out ourselves: the ignition control module. The mechanic would set the distributor when he got there later on. Thankfully, the mechanic wasn’t supposed to come until afternoon, because the part ordered turned out to not be the right one for our vehicle. Unfortunately, we wouldn’t know that until after we had gone back to the RV. Crap.

I immediately hopped on the phone to find the right ignition control module for Marilyn, if I could. I found it on the first call. Since it was not a special order part, Lance and I hopped back in the car with the dogs to go pick it up. About the time we were picking it up, the mechanic called and said he was almost to us. Crud. Lance let him know what had happened and gave him a time frame for us to be back to the RV. The mechanic wasn’t bothered and didn’t end up charging us for his wait time.

Back to Marilyn, put in control module, and the mechanic went to work. Within an hour he had Marilyn running, almost purring. I was elated! Lance was ready to head out of there right that second. I was not. Sure, I didn’t want to be in that darn parking lot, but we had just gone through 5 days, this was day 6, of being stuck, thinking we had the solution only to find out that no, we did not. I was needing the good news of Marilyn being functional, again, and the time to just enjoy knowing that we were no longer stuck. I told Lance that I wanted to wait until the morning to head out. I just needed the time for things to be ok before we took the chance they would stay that way. Lance wasn’t super pleased but conceded. The next morning we headed out, again.

One thing we learned during our Off-Rampville adventure is that these engines are notorious for running hot. Marilyn definitely does. When we replaced the starter, someone had made a heat shield for it, though we weren’t aware at the time that that was what it was. Lance didn’t put it back on but, for some reason, I felt the need to keep it in case it was definitely needed. Once Marilyn has warmed up, shutting her off means waiting at least an hour for things to cool down before we can start her, again, and usually only with a jump. We will be putting the heat shield back on, once the idea off having to do anything with the engine stops feeling like such an overwhelming burden.

Lance bee-lined for his brother Travis’ place, parking in a church parking lot up the street. I didn’t like where we were parked – it just didn’t feel like a spot that we were not going to be bothered – but Lance and the dogs loaded in the car with me and we went to his brother’s house. Travis had mentioned something about a place we may be able to ‘land’ for a little bit, which is why I thought we were going there. It turned out Lance was going to work.

Travis has a dog. Cute dog, sweet, a little skittish but friendly enough. Our dogs are pretty un-socialized. It’s not an intentional thing, just the way things have turned out. When our dogs are on leash, they are great, extremely well-behaved (well, Enzo pushes the boundaries a bit), and don’t really react much to anything.  Off leash, or when they are just with me, they tend to display their teeth and posture a lot, bark a lot if someone they don’t know or a dog is in sight. This is my fault. I have not trained them as I have my other dogs before them. Lance has trained them and, though he has done an amazing job, the dogs don’t hold me as the one in charge since I have not taken that role or participated, for the most part, in their training. Not like me at all. Life…well, I have no excuse, really. I have spent a lot of time not being emotionally well, I guess.

So, we get to Travis’ and his dog, Scout, is out. My dogs are getting anxious and a bit barky about it. Lance gets Enzo out of the car since he is the once that is the easiest to introduce to new people and dogs. I am thinking he has the intention of introducing each of our dogs to Scout but that isn’t what happens. He introduces Enzo and Scout, they do their posturing a bit, the standard ‘who are you’ sniffing, and things progress without problem. Lance goes to work.

I’m stuck in the car with Achilles and Luna, who are losing their minds, barking whenever they can see Scout and Enzo, which is often since those two are running around. They will not stop no matter what I do or say. After about 5 minutes of this and after I realize Lance is working, I’m done and not happy.  I call Lance as I start the car, telling him he has Enzo and I’m headed back to the RV as Achilles and Luna are barking like crazy.

I get back to the RV and there are people at the church. I head in to let them know that we are working out the final details of where we are going to park and will be out of their parking lot asap. They are not pleased we are there.

“Well, how long have you been here?”

“How long will it take to finalize where you are going?”

“We will definitely be out of your parking lot today. I’m thinking maybe a couple of hours is all.”

“Oh, I know. We have no intention of staying, we just didn’t have enough room to turn around at my husband’s brother’s place, which is right down the road.”

“So how long do you think you’ll be here?”

“Only a couple of hours, tops.”

“Oh! Definitely. We have no intention of staying. As I said, we are just finalizing the last details and we will be out of here as quickly as possible.”

This man turns and walks into the church, comes back out in a couple of minutes and starts taking pictures of the RV and travel trailer, then goes back in. A couple of minutes later, another man comes out and talks with me, pretty much the exact same conversation. I call Lance and tell him we need to move, now.

This is where I need to say that I am always surprised when people from a church react this way. Churches were once known as sanctuaries, safe havens, where one to go to find shelter from the cold. My experience has been this is no longer the case, not even a little bit.

I go pick up Lance and we try to Marilyn going. She hasn’t had enough time to cool off, yet so won’t start. Lance sticks his head into the church to let them know we are just waiting for the RV to cool down so it will start, then turns around and walks away before they have a chance to say anything.

I’m so worn out from Off-Rampville and annoyed by the lack of compassion displayed by these church goers that I am almost hoping they follow him out. I’m game for an argument at that point. I know, not very mature, but it was where I was at. We had been struggling to get everything sorted out and figured out for about a week (6 days at that point). I was done with being nice to anyone that couldn’t hold an ounce of compassion or an iota of understanding, or at least attempt to.

Lance, the dogs and I head to go get something to drink and get all 3 dogs out of the car, discussing things and formulating a game plan along the way. I had already looked into campground rates per day, week, month. All were a bit more than we felt comfortable investing for such small stays and the monthly amounts were…well, unreasonable to me. I see things differently than most, I guess. So, what to do?

We started looking to camping memberships. We had used Lance’s parents’ membership when we first started RV life 9 years ago and that had worked out pretty well. Sure, there’s the whole two weeks in the system, one week out thing to deal with but at least we would only have to figure out the one week thing every two weeks. We could do that. It’s a hell of a lot better than the every day thing. We hop online to see what info we can find. In the end, we settled on purchasing a Thousand Trails membership with a two a two-year commitment and very reasonable monthly payments. I hopped online and made our first reservations.

Thankfully, I got us in at the Monroe location, Thunderbird, starting that day. We would only have 4 days, since that was available, but it would give us a chance to get a bit more into mobile mode and we would have 4 solid days of not having to move Marilyn. Score!

Getting set up at Thunderbird

We are now up in Bow, WA at the Grandy Creek location. It is absolutely beautiful! I managed to set up 7 days here. We pull out of here on the 17th, then have to be out of system for 7 days. We are talking about learning of other camping memberships that may offset the 7 day out of system requirement. I’ll probably get on that today. Or tomorrow. We have been so busy, with my dogs spending way too much time in the car, that today may just be a relaxing, spending time with the dogs, doing whatever we actually feel like doing day. 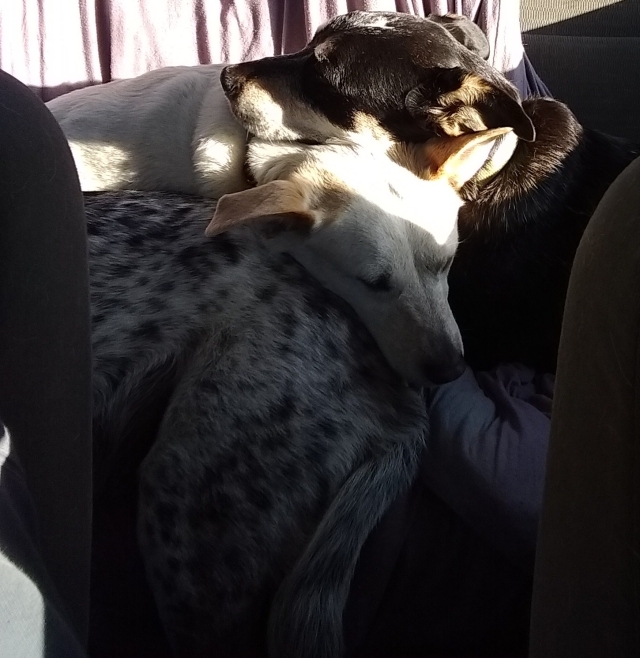 Puppies in the car

On our way out to Grandy Creek