Posted on October 10, 2014 by dragonflygypsyusa 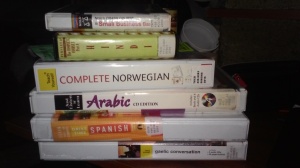 I’m really enjoying The 5 Love Languages by Gary Chapman. I would suggest this book to anyone experiencing difficulties in any of their relationships, whether they be romantic relationships or otherwise. Heck! I’d recommend this book to everyone, period. The book gives some really great information about better understanding and relating with the people we interact with that are important in our lives. I honestly think this stuff could be applied to anyone we may interact with, regardless of their level of involvement in our life/lives.

I had gotten onto the Pierce County Library website the other day and put some audiobooks on hold. Yesterday, on the way back from picking up my daughter from school, we stopped at the South Hill Library (the library where the books I put on hold will be held at for pick up) because one of the books was ready for me. The book that was ready is Nolo’s Crash Course in Small Business Basics, How to run a business – from opening day to tax day!

I have helped with starting a few businesses along my path in life and it would seem that I have some aptitude for business. A lot of it just makes sense to me. That being said, I decided it would be wise to actually learn all I need to know for making my business a success. I trust the Nolo series of informative books so this book seemed an obvious choice.

While at the South Hill Library, I decided to see what languages they had available. I had already put languages like Greek and Russian on hold but wanted to see if there were any others I might want to learn. I have to admit that Arabic was one I had never considered before. Not for any particular reason, it just never had crossed my mind before. Same with Norwegian, Gaelic, Hindi.

I know it sounds like a lot of languages to try to learn but I figured I can download each of the programs to my computer to later put onto a micro SD card to listen to on my phone. I am definitely not going to be rushing through each of the languages. I want to actually learn the language and be able to speak it, with the hopes of being at least moderately fluent in it.

I’m excited to learn some of these languages. Some of them seem a little daunting, as well. I definitely think Arabic will prove to be a bit challenging, but that is from the perspective of someone who has never even tried to learn the language so doesn’t know anything about it. For all I know, it’ll be a snap. We shall see.

I’m really glad I decided to start feeding my brain while I’m working. I’m really excited about this whole thing. I may need to start finding chat groups or something like that so that I can practice speaking some of the languages I’m going to be learning so I can capture the different nuances of each. Have I mentioned I love learning?!?!?!?