Posted on September 2, 2016 by dragonflygypsyusa 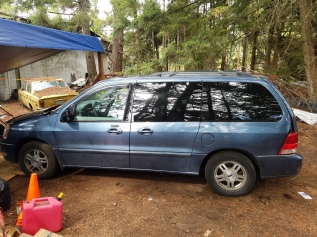 So, a couple of days ago, I picked up a 2006 Ford Freestar SEL with about 120,000 miles on it and an acceleration hesitation issue. The hesitation problem worried me a little bit, but hey!, I know how to work on cars. I’ve owned enough beaters in my life that I have had to work on to keep them moving forward. Since it seems that every vehicle (except for the Jeep and the Prius) I have bought over the last few years has been a problem child, to say the least, and not lasted very long, less than a year (The Jeep lasted a year for me), I might as well walk into a vehicle that has a known problem that I can chase down and fix. In theory, this sounds like a solid idea, but the van gave me a reason to doubt myself and my plan for a bit.

The day before yesterday, I got to work on chasing down this hesitation issue. The younger guy that I bought the van from had already been trying to track it down, replaced a few things and such, so I decided I would just recheck the things that he already did. Just because he did them, doesn’t mean he did them right or that things didn’t go wrong with what he had done – it happens. Worst case scenario for me was that I would find that everything he did was just fine and I have used up some time to check it. I could live with that.

The EGR valve was something the guy had said he replaced, and you could tell by visual inspection that it was a new unit. Good. I still had to try to remove it because one of the common issues with 2004-2007 Ford Freestars and acceleration hesitation is a carbon build up where it connects to the engine and at the exhaust return pipe (not sure that is what it is called, but it is what I am calling it). I couldn’t get the EGR off of the exhaust return pipe and didn’t feel like going and grabbing Lance for help with it, so I put it back together after checking the engine side connection for carbon build up, which there really wasn’t much of anything there. I will come back to that. On to the spark plugs…

The plugs and wires had been replaced, according to the guy I bought the van from. The wires look to be new so should be good. As I checked each spark plug, it became apparent that this guy did not check the gap before installing them. On the 2006 Ford Freestar with the 4.2l engine, the spark plug gap is supposed to be at .054. Each of the plugs were way off – .060 to .070. Well, that won’t work right. I regapped each plug to the proper width and reinstalled them.

I decided it would be good to check the connection of the plug wires to the coil, since this guy says he replaced the coil pack. Most of them were secure, as in the ‘snapped’ onto their proper post (yes, I checked the firing order and that was right). Two of them were loosey goosey, so I re-crimped their ends and got them to actually snap on. I may just end up replacing the wires since they aren’t that expensive (around $25). I’m not going to worry about that one right this second. I think I’m ok for at least chasing this issue down.

I called a really good friend of mine that is great at vehicle diagnostics. I explained everything to him with the van. One thing with the van is that the oil smells like gas, pretty badly. With this info, he believed that I had a bad cylinder or two and suggested a compression test, if I wanted to do that, but his opinion was that it was best to just cut my losses and move on. I put the van all back together and threw it on Craigslist. Talk about disappointed, depressed, defeated. But, my mind just couldn’t let it go.

I rented a compression tester from O’Reilly’s yesterday. I marked each plug wire so I knew where it went, removed them, and then removed all the spark plugs. Do you know that working on a minivan is a challenge for almost everything you want to do to it due to the position of the engine in the engine compartment? Having a convenient, extra joint in between your wrist and elbow would be extremely helpful in this situation. Getting the compression tester screwed into each spark plug port was challenging, to say the least, extremely frustrating and aggravating at its worst, but I made it work and each successive one was a little bit easier as I developed a system for it. End result: the compression is good and I have a solid, base engine to work from. Thank goodness. I was not going to rebuild this engine or find a rebuild to install in it. No. Not happening.

Today, after the clean I have scheduled, I will come home and reinstall the plugs and wires, then move onto the next thing: checking the fuel injectors. I’ve never done fuel injectors before but I have access to a couple of people who can walk me through it and I can also look it up on YouTube. Ok. Before I start on the fuel injectors and after I reinstall the plugs and wires, I am going to drive the van up to O’Reilly’s and have them hook up the OBD or OBD-2 reader to see if there are any codes coming up. No, the check engine light isn’t on, but I have had codes come up without it being on in other vehicles, so its worth a shot. Worst case scenario, I’m right were I am right now. Best case: it points me in a direction of what I should handle next.

Well, I had better get going so I can get back home and get to it. Wish me luck, People!