Posted on August 8, 2016 by dragonflygypsyusa 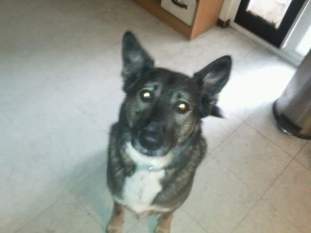 So, its been one year since I sent my beautiful Tru-dog over the rainbow bridge, and I have to admit that I miss him so much more than I thought I would a year later. There are days when I just want to throw a big temper tantrum, screaming “I want my dog back!” That dog really was my rock and I’m still a bit lost without him. I really did not expect it to hurt so much a year later, but it does. I am crying as I write this.

Now, I know many would think that, since I have three other dogs still around me, that the pain of Truman’s absence would be lessened a bit, but it’s not. I love my three dogs, but I do not seem to have the same connection with any of them, despite Enzo making it quite clear that he has decided he is my dog. Tru was a special dog, we had a special bond. There was never a moment of indecision with Truman. He was my dog, period.

I’ve caught myself looking at German Shepherd puppies a few times over the past year. One ad on Craigslist for a female German Shepherd, 6 months old, even popped up when I was looking for a car when I had to return the Prius. Part of me wanted to look at a puppy showing up in a car search as a sign, but I know better. I’ll admit that there were a few minutes of my mind trying to justify spending $600 on that puppy instead of putting that money toward the much-needed vehicle. I have three dogs. My living situation is less than optimal. I do not need to bring home another dog, and I most certainly do not need to be putting $600 toward a fourth dog, no matter how much my heart hurts.

I have spent time working on my connection with Enzo. I’m not saying we don’t have one, it’s just not what Tru and I had. I’m not sure Enzo and I will ever have that type of bond, but he is a goofy dog, pushes everyone out of his way to love on me, sleeps next to me most nights. I guess Truman spoiled me.

I want nothing more than to curl up with my three puppies today, to just be near them, but I have to work today. I could push my schedule back a little but, well, I think it is probably better if I just keep moving forward. Maybe I will light a candle in Tru-dog’s memory tonight.

I really want to have a fire but I haven’t finished sanding and re-spraying my fire pit, yet. I guess I really need to get on that. Fall is coming and I’ll want to be able to burn a few fires then, for sure.

Today, I will hold my memories of my Tru-dog close to me, and trudge through my day. Thank you, again, Tru, for being the best dog in the whole world. I love you and miss you every single day.