The Gardens and the State of the World….

Posted on July 17, 2016 by dragonflygypsyusa 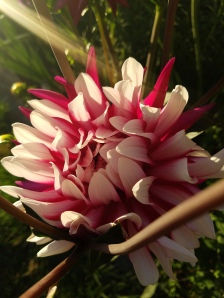 What a busy week it has been! It’s a good thing because that means a better paycheck, but I am super tired and my hands hurt a bit. A couple of the cleans I did this last week were really bad ones. It can be a little challenging to do a clean out on a unit that was an eviction and see that it was someone who had obviously taken a wrong turn, apparently got stuck on that path, and they had a very small child. Kids always get it the worst in those situations. Its heartbreaking.

This upcoming week looks like it is going to be pretty light, but that could always change. I’m sort of hoping it doesn’t, but, then again, there is a part of me, the financial part of me, that is really hoping that Cayle sends me a week’s work of worth later on today or tomorrow. Yep, I’m definitely money motivated.

My gardens are getting to be so darn pretty!! About the only things that I am still waiting to see bloom are my Lily Trees. The buds on one of the trees are getting pretty large and starting to turn a deep pink-ish purple, which means they will bloom soon. I can hardly wait to see them. The Lily Trees aren’t as big as was noted on their packaging, but I think that will be ok, other than they are back behind everything else. But we all know me…I will find a way to get some great photos of the lilies once they bloom.

I really over planted the area where the Lily Trees are planted. I left no room for me to get in and do some weeding. I’m having to try to contort my arm, try to make it bend in ways it is not designed to bend, in order to get to some of the weeds I can see. There really aren’t that many weeds in there but…well, I don’t really want to give them a chance to multiply. Oh well. I’ll figure it out and I’m sure it will be fine regardless of whether or not I am capable of getting to all of the weeds.

The pumpkins have really been blooming a lot over the past week. I have a few pumpkins that look like they have been fertilized. I’ve done some fertilizing of my own, though the male and female flowers don’t seem to be blooming at the same time often enough for me to be able to step in and play garden cupid. Oh well. I guess I’ll see what happens as time goes on. It is only the middle of July, after all.

On a completely different topic, I seem to be going through life review, again. This time seems a bit more intense, though. Maybe not intense. Thorough? It’s not all bad. There are some great memories that come up, but, of course, this is mixed in with a lot of things that I am less than proud of and would rather not have them as concrete memories. One of the upsides is that most of the less than awesome memories that come up for review don’t come with the intense feelings of regret or self-loathing. It tends to be a more passive viewing, sort of like watching a movie on Netflix…lol. I don’t know how else to explain it.

I also seem to be really ‘looking’ at the things going on in the world today – how people act toward each other, some of the political stances that come up, the abuse of power by those that are supposed to protect, and the over zealous ways people are ‘protecting their rights’ through abusive stances toward law enforcement, military, etc. This world we are living in today seems to be regressing back to knuckle dragging neanderthals, in my opinion.

This is not to say that I don’t think that everyone has the right to protect themselves. Please do. I have a very dear friend that suffered immensely due to the abuse of power of one police officer. She is still dealing with the trauma of the officer’s abuse and its been a couple of years. I know I will never get the pictures of her battered body out of my head. Such a betrayal from one we are taught to put our trust in, someone we are told to trust our very life with.

Some of the videos I’ve seen lately of police power abuse, police brutality, have left me sitting with my jaw hanging. Some of the abusive stances by civilians I’ve also seen in these videos cause my face to screw up in confusion and the bad taste it leaves in my mouth. When did we start fighting each other? Ok. I know it’s not new, it just seems like it has reached a whole new level bordering on chaos. Maybe I’m being over sensitive.

That said, I have to ask if I’m the only one that is super upset with the presidential options we have this time around? I have to admit the options, Hilary or Trump, don’t instill a whole lot of comfort. I’d rather not vote for either one, though I think Hilary might be the lesser of two evils. Would be interested in hearing what you all think.

Well, its my one day off this week so I am going to go. Have a great day Everyone!!!