Posted on June 27, 2016 by dragonflygypsyusa 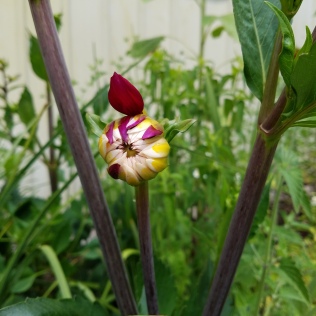 My first Dahlia bloom as it gets going (Saturday morning) 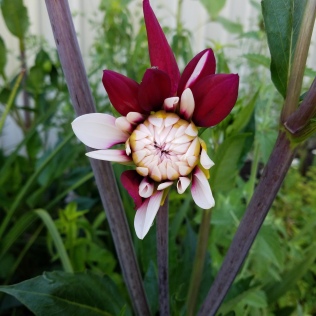 My very first Dahlia bloom is happening!! I’m so excited, but, then again, I’m always super excited whenever anything I am growing for the first time starts its show. I can hardly wait to see them all in bloom. Its going to be so beautiful!!

I’m so grateful for the beauty my gardens bring me, especially when my heart is so heavy I am finding it hard to find the beauty in most things. The beauty in my gardens is a undisputable fact…you can argue it if you want, and if flowers and things like that aren’t your thing, then I suppose you would completely disagree with me. That’s ok. I can see the beauty there that goes unnoticed by you.

Ok. That sounds really argumentative to me. I don’t mean it that way. As I said, my heart is heavy and I’m having to force myself past the beauty-muting blinders so I am not just stuck in the muck, stuck with the view of all that is less than beautiful, unable to see a reason to smile. It’s where I’m at and I’m doing my best to make it through it.

It is times like this that I begin to wonder what the world has to offer me outside of my own little, created world. Is there anything out there worth leaving the comfort and protection of my gypsy camp for? Or will venturing out into the world, into society, just bring me more heartache, more reasons to limit even further the amount of interaction with the outside world, more reasons to love my dogs more than the human population?

Human interaction is a need, I’ve read somewhere. I don’t always agree with that. In fact, the more time I spend on this Earth, the more I think human interaction is highly over rated. It involves too much opportunity for heart crunching experiences…the stray dog that someone discarded for whatever reason, the judgements of others usually based on very little data, kids being expected to act like little adults, and epic communication failures, just to name a few. More times than not, I leave home and return wishing I could just delete all that my mind, heart, and soul has experienced during that day, to wash the ick off.

One thing that is really bothering me a lot, lately – something that has always bothered me, left me confused and usually hurt – is the epic communication failures. I think I have two modes: over communication and no communication what-so-ever. I believe that if someone does something you like, love, or something that you don’t like, that hurts you, upsets you, you should tell them. Not brutally bash them over the head with it, but speak up. For instance, “I really love it when you do that,” or “Thank you.” Simple. Then there is the other stuff, the ones that aren’t so great: “I’m really upset by…,” “You know, when you did/said, didn’t do/didn’t say ____, it really hurt my feelings/made me mad/made me wonder if I had you all wrong (or whatever).” Maybe its just the people I know or deal with in my own little world of life, but it seems to be a growing trend that people just don’t talk about it anymore. They would rather be hurt, upset, angry, sad, lost, confused, whatever than confront the other person. Why is that?

I know there are times when I keep my mouth shut in those situations, mostly because saying anything would have been pointless or created more drama, or because sometimes its easier to just keep the peace. Sometimes I have to wait before opening my mouth to make sure that what comes out of it is what I really want to say, or I’m still figuring out what it is I’m feeling, but it comes out eventually. I just can’t let riffs in a relationship – friendship, intimate, or otherwise – just lie there in wait, festering until it becomes something different from what it was: resentment and discontentment. If you’re my friend, we should be able to talk to each other about these things instead of just ignoring each other. If we can’t, I’m not sure how good of friends we truly are.

I haven’t always been this way. I used to be too afraid to speak my mind because it meant I might lose what I felt was a much needed friend. I’ve come to realize that if telling someone about what I’m feeling is going to lose me a friend, then they probably weren’t my friend in the first place. This doesn’t make it hurt any less, but, sometimes, this knowledge helps me not make it personal in my head.

There have been times in my marriage when I have kept my mouth shut. Not because I felt that my husband would leave me or anything like that, but because opening my mouth would not have made things better. Everything ends up being talked about with time, and we either work it out, make as much progress as we can, if we can, and move forward from there. Sure, some things are difficult and we don’t always reach a point of agreement, unless you want to say that agreeing to disagree is truly an agreement worth making with intense situations, but neither of us is left in the dark about where the other person is standing. And maybe that is the most important part of it, for me.

I have this really great, sometimes super horrible, imagination. Pair that with the fact that I have damages (heck, who doesn’t), and leaving things in my imagination is one of the worst things you can do. I can twist the most innocent of things into a Armageddon-type monster if I don’t have all of the pieces of the puzzle. My kids have been told their entire lives that I would rather know what they are up to than have my imagination make it up, and, for the most part, they have honored that,  mostly because I think their imaginations are similar to mine.

Ok. I think I’ve killed this topic in an attempt to explain what it is going on in my head and heart. Yeah, I’m complaining, somewhat, but I’m also getting it out of my head, exposing it to light, so it possibly might lose its ability to grow into that Armageddon-sized monster I mentioned.