The repair shop texted me yesterday to let me know that the repairs have been started on the Prius and I should have my car back in about 11 days. Woot! I hadn’t received an estimate from them so I had no idea what they had found in their inspection of the vehicle. Easy enough. I drove over and spoke with them.

The guy handling my repair order is a super nice guy and has been great about explaining things to me in a way that I understand them, which I love. He let me know that his mechanic hadn’t found anything that looked like it was damaged after a visual inspection of the rear end, but, after the dent has been pulled out and the new door put on, they would do a more thorough investigation on it before sending the Prius over for an alignment. After the alignment, paint.

After the repair shop, I headed over to Enterprise to see if they would swap out the Jetta. 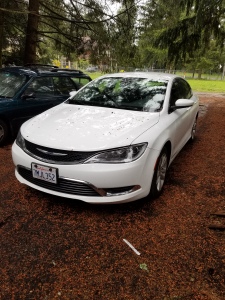 The charging ports didn’t work and I use my phone way too much to not be able to charge it while I’m out and about. Plus, the Jetta really ran like crap. I think it is having a transmission problem – at least that is what it felt like. Anyway, they swapped it out for a 2015 Chrysler 200. As you can see, it is also white. Have I mentioned I really don’t like white cars? Anyway, this is a much nicer car with about 10,000 fewer miles on it than the Jetta had. You know what else is super cool about this car?? It has a dial to shift into the different gears, from park to drive and all in between. LOVE IT! Downside with this one – it needs oil badly, so I’ll be finding out what type of oil they already have put in it and putting some in, if Enterprise doesn’t do so for me.

I have a bridal shower to go to today. My best friend’s son is getting married and his fiancée invited me to her bridal shower. I have to admit I was surprised, especially since I have only met her a few times, but I guess this will give her a chance to get to know some of the people her soon to be husband grew up around. Nice.

The rain is back today. Its been trying to rain all week, succeeded in kind of raining a couple of times, but today, continuous rain. I can’t say I’m upset by it, though it would be nice to get some nice solid days of sun and warmer temperatures, again. The temps forecasted for this week are from 58 to 67 degrees. This seems way too cold for May around here.

Well, I need to start getting myself put together for the bridal shower. Have a great day, Everyone!!