Spring is in Full Swing…Finally!

Posted on April 4, 2016 by dragonflygypsyusa

I’ve been busy weeding and planting the gardens over the past week. I finally transplanted a group of my sunflowers the day before yesterday. I had to get them out of the mini greenhouse since they had gotten too tall for it and were quickly losing root space. Most of them went into 5-gallon buckets and will need to be re-transplanted later, when I have more dirt for pots/buckets.

I weeded the area where I had the sunflowers at last year and replanted. I only put one row of sunflowers there this year, and that was more of an after thought. My lemon balm is in the ground, now, instead of buckets, and it is quite happy about it. I also put my catnip plants in the ground and it is a toss-up on if the plants are happier about this than our cat, Brucie. 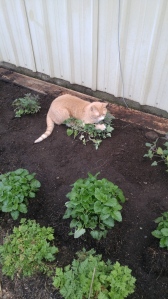 Brucie LOVES catnip, which makes sense since he is a cat, but I think Brucie has a bit higher attachment to it than most cats. As I was putting the lemon balm in the ground, I glanced back and found Brucie rolling in a catnip plant, licking it, eating it, walking away from it, looking back coy-ly, then attacking the catnip, pulling it close in a hug as he licked and ate more of it. I love that cat. 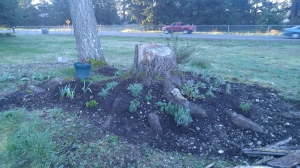 Its coming along nicely!!

I’ve weeded most of the way around the stump and its looking pretty good. I found a couple of Bachelor Buttons in the grass just outside of the stump area and transplanted them in. These yard Bachelor Buttons are a result of the one or two Bachelor Buttons that had re-seeded themselves last year. Those one to two plants created about 10 more plants through re-seeding. I love it! No waiting for seedlings to be ready to move it…YAY! I’m thinking I’m going to extend the growing area around the stump this year and try some of my seedlings there to see how they do.

I’ve decided that most of my sunflowers are going into and planters this year. I want to position them around the perimeter of the fence. Lance came up with the idea of planting some vines in other pots and alternating sunflower and vine, allowing the vine to weave itself through the fencing. I can see what this would probably look like in my head, and readily agreed with his plan. We both think this should look very beautiful. I’m still trying to decide what type of vines to grow. I have some Cardinal Climber seeds left over from last year, so I’m going to get some of them going, but I’d like to have at least one more variety and alternate them in the line-up. Maybe I’ll stop by McClendon’s or some other place that is selling seeds and see what the vine selection looks like and if one or two strike my fancy. I’m excited to see what this will look like this Summer.

I’m anxious to get my vegetable garden going. My pumpkin sprouts are getting to be a good size for transplanting. I’ve decided I want to get two more kiddie pools and put the pumpkins in one and the watermelons (when they come up) into the other one. I think this will give them the space they will love for spreading out a bit. I need to look up what are really good companion plants for pumpkins and watermelons so I can plant those in with them to help with bugs and such.

The weather has been deliciously warm and sunny. I even got a slight tan while working with my plants! I’m loving it!!!

2 Responses to Spring is in Full Swing…Finally!