Acclimating, Just Not Into It, Philae Landing…

Posted on November 13, 2014 by dragonflygypsyusa

21 degrees this morning. I must be acclimating to the cold because it doesn’t feel as cold as yesterday morning did. There is also the absence of crystal flocking on the grass. Maybe I’m not acclimating but the clouds have come back. Either way, it is still way colder than I like it and gloves are near the top of the list this payday.

I apparently needed a break from listening to audiobooks, yesterday. I was listening to Radical Acceptance for part of the day, until I realized that I wasn’t really hearing it anymore. I attributed it to the book, turned it off to listen to some other time, and started another book by an author I have listened to before and enjoyed. The audiobook was Your Heart’s Prayer: Following the Thread of Desire into a Deeper Life by Oriah Mountain Dreamer.

This is usually where I would do my own personal review of what I listened to. Unfortunately, when the book ended, I realized I hadn’t really been listening to it either. I was feeling sort of blah yesterday, and I think this had something to do with the non-listening. Think dial tone, flat line.

Anyway, I am going to walk away from those two books for now. Today, I am going to try to listen to The Theory of Everything: The Origin and Fate of the Universe by Stephen W. Hawking. If I find I am not listening, then I am going to just pull my ear buds and go with silence. Perhaps that is what I am needing.

It just hit me that The Theory of Everything is kind of appropriate to listen to with the whole Philae landing on Comet 67P. Ok. I know. Kind of a stretch in connection there, but my mind made it anyway. Maybe it’s not such a great stretch.

The Philae probe’s mission was to land on the comet, which it did successfully. Now, its mission is to photograph and test the surface of the comet it landed on. It is believed that the materials that compose the comet may hold secrets to the history of our solar system, such as its evolution. A lot of theories are going to be made once scientists have the opportunity to analyze the information sent back to them from Philae. Those theories are going to include the origin of the universe (or at least our solar system) and perhaps lead to theories of the universe’s fate (or future. you decide). 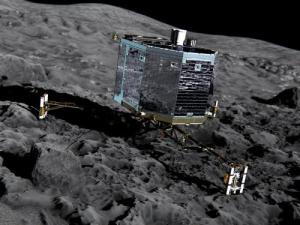 Its kind of exciting to think about. Sure, the information that comes back may be nothing scientists haven’t already theorized about, but it’s still exciting to think that an unmanned probe managed to land on a comet with minimal gravitational pull after traveling 6.4 billion miles through space. I think our solar system just grew smaller.

Over-thinker with way too much availability to the internet to research whatever might come to mind, amateur photographer, dog enthusiast, learning every day, working on finding my undamaged self.
View all posts by dragonflygypsyusa →
This entry was posted in Left foot, right foot, repeat and tagged acclimating, brrr, cold, comet, landing, mission, not listening, Oriah Mountain Dreamer, Philae, Radical Acceptance, silence, solar system, Stephen W. Hawking, The Theory of Everything, Your Heart's Prayer. Bookmark the permalink.