Posted on November 12, 2014 by dragonflygypsyusa

Its 20 degrees this morning. I have added sweat pants and a long sleeve shirt to the layers this morning and have a blanket ready for when I start to get cold(er). My poor heater in the travel trailer is doing all it can to keep it warm in there. Usually, we keep it on low for a bit then shut it off because it is plenty warm in there. The last to nights and mornings, we have had to have the heat on high and leave it on. This is going to eat a lot of propane. Good thing propane is at a pretty reasonable price right now.

I failed to mention, yesterday, that the reason it has gotten so damn cold at night here is because it has been sunny. No cloud cover to hold in any warmth. The days, though still cold, have been beautiful, crisp, fall days. It has smelled like fall, which basically means I can smell the cold. It smells different from winter but I couldn’t begin to explain how right now. It just does. Maybe when winter gets here I’ll be able to tell you what the difference is.

I have a clean in Seattle, today. I really don’t like driving up to and around Seattle. The clean is in North Seattle, the Greenlake district, and will take an hour and a half to get to. Lots of cars, people, long drive.

I lived in downtown Seattle when I first moved here 24+ years ago. I loved it then. I also wasn’t driving. Usually, the only time I had to drive was when I went to the grocery store. I walked everywhere else and enjoyed the downtown atmosphere. I didn’t really like driving around Seattle then, either.

With the work I’m doing now, I don’t really have much of a commute. Almost all of my cleans are between 15 and 30 minutes from me and I almost never have to get on the freeway. I like it like that. 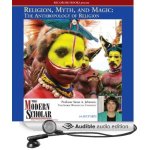 I finished listening to Religion, Myth, and Magic: The Anthropology of Religion for the second time yesterday. This is one audiobook I will be listening to many times. Professor Susan Johnston begins the series by describing what religion is. She goes on to explain different religious traditions, what constitutes a religious specialist, and when evidence of religious practices show up in history. This would be true of many of the religious texts that I have looked at over the years, but the Professor takes it beyond this point. She delves into describing some of the religious rituals of different cultures over the lifespan of humans, delves into cultural beliefs regarding religion and magic, explains the lack of evidence to support some commonly believed myths, talks about ancient, modern, and new religions, witchcraft, etc.

I have really enjoyed this audiobook, which is part of the reason I will be listening to it many times. There is such a plethora of information provided that there is no way I could begin to get it all in a couple of listenings and the way Professor Susan Johnston provides this information keeps me interested and wanting to learn it all. I am feeling like I have a better understanding of the role of religion in society, and the roles it has played throughout the history of mankind. It many seem obvious, but she really broadcasts her interest in the subject matter. It’s a great ‘read.’ I would recommend listening to/reading this audiobook to everyone, whether it is just an interest or there is the desire to better understand religious beliefs and how they began.

I started listening to Radical Acceptance: Embracing Your Life with the Heart of a Buddha by Tara Brach, PhD after I finished Religion, Myth, and Magic. So far, I like it alright. I have to admit, though, that I am not enjoying the narrator. She talks in an even, meditative voice, which isn’t a bad thing, necessarily. It just lacks the expression of interest in the topic. Well, at least to me, that it how it is. It is clearly heard script reading. I guess I want a narrator that can feed my interest by expressing interest themself. I have gleaned some good information, different perspectives, from the book so far, and I am sure there is much more of that to come. I will have no problem continuing with the book because of the narrator’s reading.

Ok. My fingers are frozen. I’m headed in to thaw out and get ready to head toward Seattle. Have a great day, Everyone!!!

Over-thinker with way too much availability to the internet to research whatever might come to mind, amateur photographer, dog enthusiast, learning every day, working on finding my undamaged self.
View all posts by dragonflygypsyusa →
This entry was posted in Left foot, right foot, repeat and tagged 20 degrees, clean, cold, commute, magic, Myth, PhD, Professor Susan Johnston, Radical Acceptance, Religon, Seattle, smell of fall, Tara Brach, winter. Bookmark the permalink.