Posted on September 24, 2014 by dragonflygypsyusa 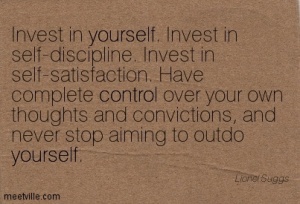 : the ability to make yourself do things that should be done

:  correction or regulation of oneself for the sake of improvement

In a world that offers so many wonderful things, I believe self-discipline can be a huge challenge. It is way too easy to just pick from the abundance available all around us. It is almost like having a genie in a bottle. You want this, it is almost always readily available, as long as you have the money to get it. It is no wonder we are a country of high debt.

Self-discipline is such a valuable tool. I’m not necessarily talking about the discipline to say no to that item you’re wanting despite its lack of importance to your overall well-being. I’m talking about attaining goals. Self-discipline has got to be a main component of the plan on that goal path or one may wander around the goal, looking at it, wanting it, but causing their own failure by giving into immediate gratification.

My greatest teacher of self-discipline was college. I was a non-traditional college student. I had spent my life giving into the instant gratifications that caught my attention. When I started college for my Associates of Science in Criminal Justice, I was almost 39 years old. I had doubts in my abilities to be successful in college, but I really wanted that degree. I was at a point in my life when I needed to prove to myself that I was capable of more than just the failures of my past. It would have been wonderful to achieve that goal with a 4.0 GPA and, if I had been a little more disciplined than I had been, I’m fairly sure I could have had that GPA. I wasn’t far off, though (3.77), and I achieved the degree. Though attaining the degree itself was a wonderful feeling, the best feeling was knowing that I was capable of reaching the goal I had set in front of myself despite having much faith in being able to do so when I started. I was capable of self-discipline.

I now have a new goal in front of me that causes me some angst in my ability: quitting smoking. Today is the day I set for myself to start rationing the number of cigarettes I will allow myself each day between now and October 1st (my quit date). Its embarrassing to say, but I have smoked since I was around 11 years old. The habits are deeply ingrained. I say habits because it is so much more than just smoking that is the habit. There are all of the triggers to wanting a cigarette that are present and must be dealt with as well.

Apparently the Universe is backing me on this goal, though. Though I have carefully budgeted my last paycheck to make it to the next one, unexpected expenses came up and making it to the next paycheck is going to be challenging at best. This translates into not enough money to stay alive, moving forward, and buy cigarettes. This was not the plan in reaching the goal, but today is the day I will stop smoking. I’m nervous stepping out of the plan I had set for myself, but life has a way of doing that sometimes. The level of self-discipline I am going to have to have as I start this path toward the goal is going to be huge. I’ve got this, right?

I have loaded up the sd card in my phone with meditations to listen to all day, and throughout the week. As I said in an earlier post (FotP, Day 13), I plan on writing about my progress through this process on here to give myself something to be accountable to. That will be another act of self-discipline. I’ve always like to keep things like this to myself in case I should fail. I’m upping the ante by including this blog in this path. Sure, I could lie about my progress, but that just isn’t who I am anymore. Say what you mean, mean what you say doesn’t allow for lies, and I care about this blog. Polluting it with lies would take that away.

So, here we go, left foot, right foot, repeat, armoured with self-discipline, desire, motivation. Wish me luck! Send me positive energy because I know this is not going to be easy, but it is just one of the paths I plan on taking to self-improvement. Deep breaths…. Who’s with me?

Over-thinker with way too much availability to the internet to research whatever might come to mind, amateur photographer, dog enthusiast, learning every day, working on finding my undamaged self.
View all posts by dragonflygypsyusa →
This entry was posted in Focusing on the Positive and tagged A-Z, challenge, college, day 19, goals, instant gratification, path, Positive, quitting smoking, self-discipline. Bookmark the permalink.

3 Responses to Focusing on the Positive, A-Z; Day 19: Self-discipline